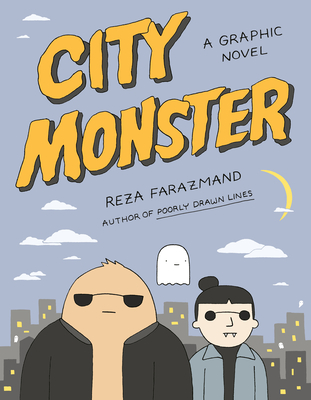 Don’t Miss Poorly Drawn Lines on Cake, airing on FX and streaming on FX on Hulu!

From New York Times bestselling author and artist Reza Farazmand, his first graphic novel about a young monster who moves to a big city.

City Monster is set in a world of supernatural creatures and follows a young monster who moves to the city. As he struggles to figure out his future, his new life is interrupted by questions about his mysterious roommate—a ghost who can’t remember the past. Joined by their neighbor, a vampire named Kim, they explore the city, meeting a series of strange and spooky characters and looking for answers about life, memories, and where to get a good beer.

With Reza's signature style, and familiar snark, this graphic novel is equal parts irreverent and insightful, the perfect vehicle for conveying the utter absurdity of our bizarre and confusing times.

Reza Farazmand is a New York Times-bestselling author, comedy writer, and creator of the popular internet comic series Poorly Drawn Lines. He has published four books, including the graphic novel City Monster and the comic and essay collection Poorly Drawn Lines: Good Ideas and Amazing Stories, along with two followup collections: Comics for a Strange World and Poorlier Drawn Lines. His work has been featured in McSweeney’s Internet Tendency, Adventure Time comics, Buzzfeed, NPR, and on Comedy Central. He lives and draws in Los Angeles.

Praise for City Monster:
"Irreverent, read-it-in-one-sitting graphic novel...City Monster's world is populated with absurdity so infectious that giggling and even snorting laughter may occur during reading… Absurdity and adult themes make this humorous graphic novel about a city monster something to be devoured.”—Shelf Awareness