Golden Boy: A Murder Among the Manhattan Elite (Mass Market) 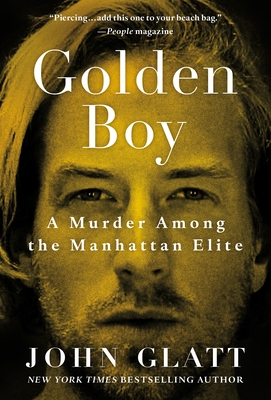 Golden Boy: A Murder Among the Manhattan Elite (Mass Market)

By all accounts, Thomas Gilbert Jr. led a charmed life. The son of a wealthy financier, he grew up surrounded by a loving family and all the luxury an Upper East Side childhood could provide: education at the elite Buckley School and Deerfield Academy, summers in a sprawling seaside mansion in the Hamptons. With his striking good lucks, he moved with ease through glittering social circles and followed in his father’s footsteps to Princeton.

But Tommy always felt different. The cracks in his façade began to show in warning signs of OCD, increasing paranoia, and—most troubling—an inexplicable hatred of his father. As his parents begged him to seek psychiatric help, Tommy pushed back by self-medicating with drugs and escalating violence. When a fire destroyed his former best friend’s Hamptons home, Tommy was the prime suspect—but he was never charged. Just months later, he arrived at his parents’ apartment, calmly asked his mother to leave, and shot his father point-blank in the head.

Journalist John Glatt takes an in-depth look at the devastating crime that rocked Manhattan’s upper class. With exclusive access to sources close to Tommy, including his own mother, Glatt constructs the agonizing spiral of mental illness that led Thomas Gilbert Jr. to the ultimate unspeakable act.

English-born JOHN GLATT is the author of more than twenty-five books including The Lost Girls and My Sweet Angel, and has over thirty years of experience as an investigative journalist in England and America. He has appeared on television and radio programs all over the world, including Dateline NBC, Fox News, ABC’s 20/20, BBC World News, and A&E Biography.

“Piercing … add this one to your beach bag.” –People Magazine

“Glatt is a balanced narrator of this story; though it would be easy to dismiss Gilbert as a privileged man-child protected by wealth and connections, the author also examines how complicated mental illness diagnoses can be, even for people with access to doctors and treatments….A tragic character study at the intersection of wealth, privilege, and mental illness, told with empathy.” — Library Journal

“True crime fans will find this a compelling read.” —Booklist

"Glatt shares alarming revelations about the state of the mental health system, where psychiatrists are largely powerless to intervene even when they see serious psychological issues that could result in harm to the patient or others. This is must reading for true crime enthusiasts who prize depth over salaciousness." --Publishers Weekly

"Glatt expertly interweaves the issues of mental health and privilege... by thorough investigative research and empathy for all involved, [he] has managed to present these complicated matters in an intriguing, enthralling narrative." --Criminal Element