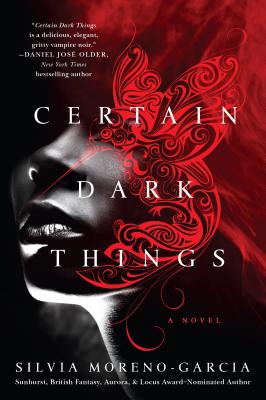 By Silvia Moreno-Garcia
Out of Print - Do Not Order

From a critically-acclaimed novelist Silvia Moreno-Garcia comes Certain Dark Things, a pulse-pounding and action-packed contemporary fantasy that turns vampire fiction on its head.

Welcome to Mexico City… An Oasis In A Sea Of Vampires…

Domingo, a lonely garbage-collecting street kid, is busy eking out a living when a jaded vampire on the run swoops into his life.

Atl, the descendant of Aztec blood drinkers, must feast on the young to survive and Domingo looks especially tasty. Smart, beautiful, and dangerous, Atl needs to escape to South America, far from the rival narco-vampire clan pursuing her. Domingo is smitten.

Her plan doesn’t include developing any real attachment to Domingo. Hell, the only living creature she loves is her trusty Doberman. Little by little, Atl finds herself warming up to the scrappy young man and his effervescent charm.

And then there’s Ana, a cop who suddenly finds herself following a trail of corpses and winds up smack in the middle of vampire gang rivalries.

Vampires, humans, cops, and gangsters collide in the dark streets of Mexico City. Do Atl and Domingo even stand a chance of making it out alive?

SILVIA MORENO-GARCIA is the critically-acclaimed author of the novels Signal to Noise - winner of a Copper Cylinder Award, finalist of the British Fantasy, Locus, Sunburst, and Aurora awards - and Certain Dark Things, which was selected as one of NPR's best books of 2016. She won a World Fantasy Award for her work as an editor and lives in Canada.

"[S]uspenseful, character-driven, and powerfully emotional.... Certain Dark Things does for vampires what Stephen Graham Jones did for werewolves in his novel Mongrels earlier this year: beautifully and powerfully reinvigorates one of the seminal horror fiction monsters in some truly unexpected and sublime ways....
Filled with powerful themes of trust, corruption, vengeance, and bloodlust, this novel is by turns sensual and grim, introspective and disturbing, suspenseful and moving, and all told in the sleek and lyrical prose for which Moreno-Garcia is deservedly acclaimed." —New York Journal of Books

"All the characters in this book are as sharply realized as the city in which they live and fight.... I love to see compelling new takes on vampires, and Certain Dark Things succeeds beautifully.... Smart, tender and insightful." —NPR.org

"The Mexican setting is a huge part of the allure of this new novel from Moreno-Garcia (Signal to Noise), as are the fascinating varieties of vampires she sets forth." —Library Journal (starred review)

"Moreno-Garcia is an author to watch." —Publishers Weekly

"[A] gangster vampire story that transcends the genre." —PopSugar

"A finely stitched Halloween costume, deriving most of its horror and pleasure from the very human bones beneath it." —Paste Magazine

“If you enjoy these darker vampire stories, I’d definitely recommend picking this up." —That Wild Soul

“If you haven’t read any of Silvia Moreno-Garcia’s work yet then I don’t quite know what you’re doing with your life, she’s a fantastically fresh voice in the world of speculative fiction and Certain Dark Things is proof of her creativity.” —The Moor Maiden

"I’m a fan of (all different kinds) of vampires stories, but it was refreshing to read a suitably dark novel with excellent world-building. Moreno-Garcia weaves together Aztec mythology into her vampire lore, and situates the clans in the drug world of Mexico. There’s a cast of sympathetic and layered characters, and the writing is equally effortless even when describing gory action scenes and contemplative moments considering moral dilemmas." —Molly Wetta, Book Riot

“It’s the first time I’ve read a vampire novel that’s made me feel like I’m reading something new, something fresh, and I love how in parts it’s gritty and nasty and dark.” —Curioser and Curioser

"Certain Dark Things is a delicious, elegant, gritty vampire noir. Moreno-Garcia has created a world that pulses with life and terror and honesty." —Daniel José Older, New York Times bestselling author of Shadowshaper and of the Bone Street Rumba series

“With its vibrant prose and stellar world building, Certain Dark Things is one of the best books I’ve read in years.” —V. E. Schwab, author of the New York Times bestselling Shades of Magic series

"If The Girl with the Dragon Tattoo met (and devoured) Interview with the Vampire to the twined rhythms of Octavio Paz, Bram Stoker, and Ozomatli, you might come close to the layers and textures of Certain Dark Things. Set in a beautifully and heartbreakingly rendered Mexico caught up in Narco-Vampire wars, Silvia Moreno-Garcia's novel lets us fall in love with many perspectives before she breaks our hearts and puts us back together again. I cannot wait for the movie." —Fran Wilde, Andre Norton Award-winning author of Updraft

“Not since Anne Rice’s seminal Interview with the Vampire has the vampire story been so radically reimagined. Silvia Moreno-Garcia reinvents it for the 21st century in this high-concept, explosive tale of narco-vampires in Mexico City—and just when you thought it was safe to step out of the coffin. Certain Dark Things is dark, inimitable, and so very, very cool. Unmissable.” —Lavie Tidhar, World Fantasy Award-winning author of Osama

“Silvia Moreno-Garcia’s gritty novel is steeped in the history of Mexico City and vampire lore and yet manages to deftly re-invent the bloodsucker. The wonderfully complex Atl and her 21st Century Renfield, Domingo, are revelations. Certain Dark Things packs a wallop.” —Paul Tremblay, Bram Stoker award-winning author of A Head Full of Ghosts

"With Certain Dark Things, Silvia Moreno-Garcia demonstrates that there is always more to be done with familiar figures such as the vampire, and that in the hands of a talented writer, the creatures can rise to new (un)life.” —Locus

Praise for Signal to Noise:

"One of the outstanding debut fantasy novels this year." —Chicago Tribune

"In a poignant, graceful coda, Moreno-Garcia brings the book full circle, slyly subverting the expectations of a linear narrative and punctuating Meche's story with a hushed, lovely flourish. In many ways, Signal to Noise is a coming-of-age tale, but it's also the tale of what comes after--and what happens when forces beyond our control, magical or otherwise, are better left that way." —NPR

"I know it's very early in the year but I can already tell this is one of the Notable Reads of 2015." —Kirkus

"Plenty of books use magic to talk about coming-of-age stories and the secrets that people bury... but few of them are as sad, or as evocative, as Silvia Moreno-Garcia's new novel Signal to Noise." —io9

"This accurate depiction of outcast teenage life cycles effortlessly between eras. Meche, Sebastian, and Daniela are deeply believable characters, and numerous '80s musical references make this unusual story a welcome blast from the past." —Publishers Weekly

"Suffused with the music--English-language and Spanish, pop and punk--that Meche and friends use to make their magic and soundtrack to their lives, this is both a spiky and charmingly sweet romance of making amends and starting again." —SFX Magazine (4 stars)

"Moreno-Garcia has a solid and convincing prose style, robust and subtle in all the right places... a successful debut, and a very interesting book." —Tor.com

"This little indie release deserves all the attention." —Book Riot on Signal to Noise

"It works, all of it, in a story that’s decadent, riveting and worth the restless nights and a nightmare or two." —The Globe and Mail

"There’s nothing sparkly about Certain Dark Things, though: the novel is a hard-edged, emotionally mature, occasionally heartbreaking example of contemporary fantasy at its finest." —The Vancouver Sun