A Lynched Black Wall Street: A Womanist Perspective on Terrorism, Religion, and Black Resilience in the 1921 Tulsa Race Massacre (Paperback) 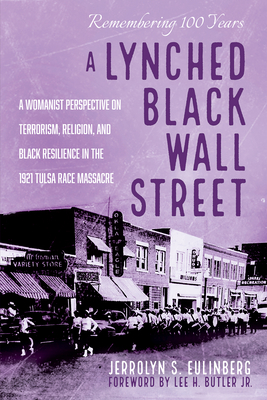 This book remembers one hundred years since Black Wall Street and it reflects on the 1921 Tulsa Race Massacre. Black Wall Street was the most successful Black business district in the United States; yet, it was isolated from the blooming white oil town of Tulsa, Oklahoma, because of racism. During the early twentieth century African-Americans lived in the constant threat of extreme violence by white supremacy, lynching, and Jim and Jane Crow laws. The text explores, through a Womanist lens, the moral dilemma of Black ontology and the existential crisis of living in America as equal human beings to white Americans.

This prosperous Black business district and residential community was lynched by white terror, hate, jealousy, and hegemonic power, using unjust laws and a legally sanctioned white mob. Terrorism operated historically based on the lies of Black inferiority with the support of law and white supremacy. Today this same precedence continues to terrorize the life experiences of African-Americans. The research examines Native Americans and African-Americans, the Black migration west, the role of religion, Black women's contributions, lynching, and the continued resilience of Black Americans.